Barbara Golden, who wrote her first song when she was 40, is an artist living in the SF Bay Area and Sutton Québec. Born in Montréal, the escaped housewife-schoolteacher studied at Mills with Terry Riley, Bob Ashley, and Lou Harrison. Since 1985 she’s done politically incorrect performance raunch: WIGband, Balinese music (Gamelan Sekar Jaya), and radio (producer, host, board op of Crack o’ Dawn, Pacifica’s KPFA Berkeley). Her videos including the prizewinning Take Me Out to the Ballgame have been shown in festivals worldwide. Barbara Golden’s Greatest Hits, her cookbook/CD, beloved for its tasty recipes and tasteless songs, sold out its second edition. Barb’s performed with many indie groups: Matmos, The Residents, The Hub, Blectum from Blectum etc. Summer 2010: Bali tour with Gede Oka Negara and a bamboo marimba band. She plays keyboards with The Golden Path. WIGband is completing their new exercise vid, Stimulus Spa Package. She still does Crack o’ Dawn, sigh… 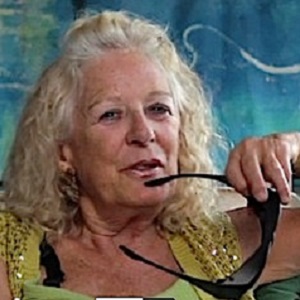