While studying sciences at the University of Strasbourg, Besançon and Lyon, Pierre-Alain Jaffrennou followed music studies at the conservatory and with private lessons, and in the electroacoustic class of Pierre Schaeffer at the National Superior Conservatory of Music in Paris. After these music studies, he became researcher for the Group of Music Research—ORTF—INA (GRM) where he created the computer music research laboratory. In 1981, with James Giroudon, he created Grame, national music creation centre supported by the French Cultural Ministry. He is also professor with tenure in Arts and Techniques of Representation at the School of Architecture in Lyon, where he leads several research projects about Architecture and Computer Science. His music works are varied: electroacoustic music, music with live electronics, instrumental music. His production is strongly marked by the contribution of computer in the process of music composition. 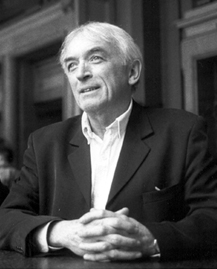