Paul Lansky has long been recognized as one of the pioneers of computer music. His works are widely available on recording, largely on Bridge Records. His work Notjustmoreidlechatter is included in the Norton Anthology accompanying the widely-used music appreciation text, The Enjoyment of Music. In 2002, he was the recipient of a lifetime achievement award from SEAMUS (Society for Electro-Acoustic Music in the United States). In 1999, he was the subject of a documentary made for European Television, My Cinema for the Ears, directed by Uli Aumuller (available on DVD). Numerous dance companies have choreographed his works, including Bill T. Jones/Arnie Zane Company and Eliot Feld. Though the bulk of his work is electronic, he has kept also written several works for instruments and electronics, and a number for instruments alone, over the years. Recent work includes a concerto for two pianos and orchestra and a percussion quartet. 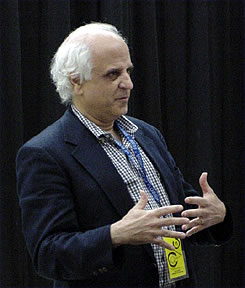