Phivos-Angelos Kollias was born in Rhodes, Greece, were he started his education in music (piano, theory, harmony etc.). He studied music at Anglia Polytechnic University in Cambridge (England), focusing on electroacoustic and instrumental composition. He completed a Master of Arts in instrumental and vocal composition at City University, London. He is now studying in University of Paris 8, for a Master degree in electroacoustic composition with Horacio Vaggione. He has also studied composition with Richard Hoadley, Rhian Samuel and Athanasia Tzanou. He has taken part in seminars of significant composers like Helmut Lachenmann, Georges Aperghis, Toshio Hosokawa, George Benjamin and Ludger Brümmer. He has participated in international events like Darmstadt International Summer Courses with a scholarship from the Internationales Musikinstitut Darmstadt (Germany), International Computer Music Conference (USA) and Hommage á Bartok (Hungary). He is a member of the International Computer Music Association (ICMA) and the Hellenic Electroacoustic Music Composers Association (HELMCA).
He has won the Award of the Greek Festival of Chamber Music 2005 (Anthousa, Greece) for his string quartet. Descriptions of some flows has been performed for the Hungarian Radio in Budapest, has been recorded, broadcasted and released on CD; This Syntax has been selected from the Viennese ensemble Pierrot Lunaire Ensemble Wien, for a series of concerts worldwide (Austria, Germany, England, Italy, Poland, Alaska, Israel, Australia, Mexico, Costa Rica, Greece); Asphatherios will be in the program of the International Computer Music Conference (ICMC) in New Orleans and it will be broadcasted on the Tulane Radio Station. 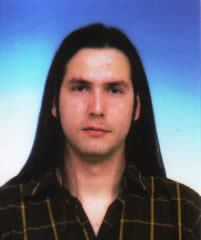