Panayiotis Kokoras studied composition with I. Ioannides and A. Kergomard in Athens (Greece). In 1999, he moved to England to study at the University of York, where he completed his MA and PhD in composition with Tony Myatt. His works have been commissioned by institutes and festivals such as the Fromm Music Foundation (Harvard), IRCAM (France), MATA (New York), Gaudeamus (Netherlands), ZKM (Germany), IMEB (France) and Siemens Musikstiftung (Germany), and have been performed in over 500 concerts around the world. His compositions have received 60 distinctions and prizes in international competitions, and have been selected by juries in more than 200 international calls for scores. Kokoras’ sound compositions develop functional classification and matching sound systems written on what he calls “Holophonic Musical Texture.” As an educator, Kokoras has taught at the Technological and Educational Institute of Crete, and at the Aristotle University of Thessaloniki (Greece). In fall 2012, he was appointed Assistant Professor at the University of North Texas. 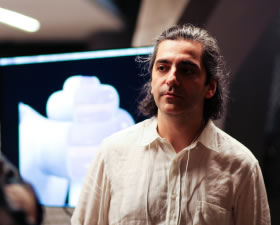