Lia Pas is a multidisciplinary creator-performer who has worked in the fields of music, writing, and theatre. Born and based in Saskatoon, Lia studied music at York University, Toronto (BFA 1995) and completed her MA in Devised Theatre at Dartington College of Arts (October 2006) in Devon, UK. Lia is an accomplished musician, composer and improviser. Her compositions have been performed by soloists and ensembles and broadcast on CBC Radio. Her two interdisciplinary shows, The Descent of Inanna (2001) and Baba Yaga’s Hut (2002), played to sold-out audiences in Saskatchewan. She is currently director, composer and soloist of the Mysterium Choir, focusing on innovative and meditative music. Lia has written poetry, fiction, non-fiction, and scripts. In addition to her volumes of poetry, her literary work has been broadcast on CBC Radio and widely published in literary periodicals. Lia’s current project-in-progress, splanchnologies, is an interdisciplinary performance and text piece exploring anatomy as image. She recently completed her videopoem, susurrations, as part of this project. 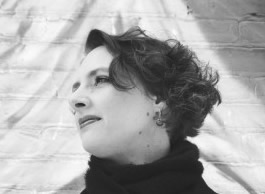