Sound is central in Mirjam Tally’s creations. Her music is a flow of playful contrasts where a sense of humour and poetic use of sound are blended to mix. Her earlier works are mainly for chamber ensembles and electronics. In recent years, importance of orchestral music has increased in her œuvre. Sometimes she uses elements of jazz, folk and pop, Nordic or exotic instruments (Estonian kannel, didgeridoo, tanpura, accordion and others) and treats sound material with a modernist open mind. She has graduated from the Estonian Academy of Music as a student of Lepo Sumera in 2000. Since 2006, Tally lives on the island of Gotland, Sweden. She had her international breakthrough in 2008 at the ISCM World New Music Days with her orchestra work Turbulence. (later played at the Venice Biennale and selected as a recommended work at Rostrum), a work for which she was awarded the Lilla Christ Johnson Prize in 2008. In 2009–10, she was Composer-in-Residence at Swedish Radio P2 channel. 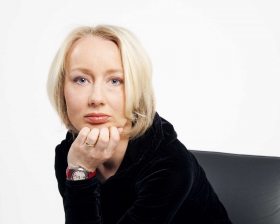