Parisa Sabet is an Iranian composer based in Toronto. Her compositions have a unique and lyrical quality that stem out of blending elements of Eastern and Western musical languages. She brings a vast range of colour to her compositions by incorporating varied timbral and instrumental effects. Parisa’s repertory consists of pieces written for solo, duo, film music, and small and large ensembles. Parisa is the recipient of several grants and scholarships including 2014–15 Ontario Graduate Scholarship and the John Weinzweig Graduating Scholarship. She also received an SSHRC Canada Graduate Scholarship in 2013–14 to research the indigenous music by women in her native Iran and to write an original composition related to this theme. Professionally, her compositions have won various competitions and been performed in different venues in North America. Currently, she is pursuing her DMA in composition at the University of Toronto under the supervision of Christos Hatzis. 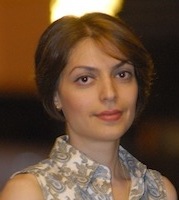